We had booked a holiday in Northern Cyprus (the Turkish bit) staying in a friends villa with a private pool. This was our first holiday with Lucy travelling and staying as herself so was a big deal. We went with our daughters, my son and his wife and their 4 month old son.

We had a bit of a nightmare on the flight out as the first was cancelled after a 5 hour delay (2 hours spent on the plane) and we had to go back home and return the next day for a new flight which was delayed by an hour.

We had no problem getting through security each time etc however the gate staff were quite unprofessional both times. Lucy was dressed quite adrogynously and was wearing glasses whereas in her passport photo she is not. There was a query by the gate staff in both instances where in the end I had to tell them she was my wife and transgender at which point there were some sniggers. We didn't say anything however I have contacted the airline to ask for a copy of their policy for dealing with transgender customers so we will see what that brings.

There were no issues with the passport control in Larnaca nor the border control staff as we had to go over the border to Northern Cyprus. Not that we were expecting any issues but it was always a worry especially as we were entering a muslim country. It was an hour and 15 mins drive from the airport to the villa but it was great being able to see the different views, driving round the bottom of the mountains and notice the difference in population density in Northern Cyprus.

We knew our friends villa was lovely as we had seen some pictures however they did not really show how large, spacious and beautifully decorated the place was. There was definitely a wow factor when we opened the door and every last detail was perfect.

The pool was 20 metres long with a waterfall feature at the end. It was perfect, not cold at all and great for swimming and playing. 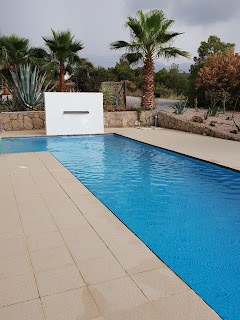 There were mountains to the left and the sea to the right. It was a great aspect and the sunsets were amazing which we viewed sat on the patio every evening.

Our friend had thought of every detail. There was a large bbq area with various gas fired cooking areas with hot plates and rings as well as the bbq. Lovely seating in a flower covered area with Turkish lanterns setting the scene at night. 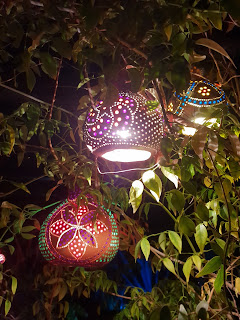 It wasn't a densely populated area and the nearest supermarket was a 10 minute drive away but luckily we had hired a car so that was not an issue. My son and his wife drove off to the mountains and local castle on a couple of the days but we were happy to spend most of our time at the villa around the pool as it was very warm.

Lucy was free to relax and be herself and for me it was quite emotional seeing her wearing the right holiday attire for the first time ever. She had her natural hair styled in an easy to care for style which really suited her and she was really relaxed and comfortable around the family as they were with her.

Her hair is now really long and curly and she let me straighten it and partially put it up. It looked great and gives her possibilities to go out as an every day option without having to wear a hot wig (we are looking into the possibility of a weave). 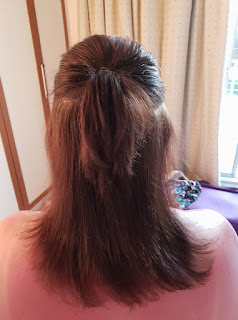 We went off to the main town on one day and had a walk around the shops and stopped for lunch. Although Lucy dressed adrogynously she was more on the female side and had nail varnish on, her hair up and some lovely girlie sandals. No one said anything and we all felt very comfortable. Lucy felt so comfortable that she even went into a shop to look at a bikini and once the shop assistants realised Lucy was the potential purchaser they were very helpful and, a first for Lucy, she even went into the changing room to try the bikini on which fitted perfectly and she obviously purchased. All very exciting.

We went out for dinner a handful of times and the food was lovely and so cheap as the exchange rate is so favourable. Lucy had a few wobbles while were away. Dysphoria is never far away and sometimes the slightest thing can trigger it. As a result outside of the villa she mostly dressed adrogynously as that is how she felt most comfortable.

The journey back over the border coming home was non eventful and although our flight home was delayed by an hour it wasn't too bad. It is lovely seeing Lucy at home with tan lines in the right places!

The whole holiday was lovely and really relaxing and our friends villa has a place in our hearts. Everyone agreed that we had all had a fantastic time and we are already planning on trips back there next year.... yes trips :)