So the tattoo cover up has started. We both went to the tattooist together last week who traced the design onto Lucy's arm. It looked huge but with big beautiful peony flowers and leaves.

To be fair I thought Lucy was going to squirm more than she did however she was totally great and apart from some funny screwed up faces when he was inking nearer the inside of her arm it didn't seem to bother her too much. She had taken 2 ibuprofen before we went as they said that it does reduce any swelling. Three hours later and all the outline was done along with some significant shading of the flowers that were directly over her previous tattoo. Without it being anywhere near finished it already is difficult to make out the awful tattoo below. We both couldn't stop looking at it as it is so amazing. She is booked in later this week for 2 hours for the shading to be finished and some of the colour to be added although it may need a couple more additional hours work before it is totally finished. The colour of the flowers will be pink, mauve, pale blue and yellow and I just know it is going to be amazing. This is the first of 3 tattoos cover ups. I'm not allowed to share any pictures until this one is finished however I will do, so watch this space.

While I was waiting I picked out a design for myself. For a very long time I have wanted a tattoo on my back representative of all our children but had not seen anything I liked until then. I had a chat with the wife as we asked changing the design a bit and she gave me a price. So now I have to save as I cannot afford it at the moment especially with Christmas not far away however I am very excited. We also had a discussion about covering Lucy's other 2 tattoo's. One is on the same arm and above the cover up in progress and will be incorporated into the same design and in total will end up being a sleeve. For the other tattoo at the top of her other arm, the chap suggested a phoenix which we both loved the idea of and the meaning. A new life rising from the ashes. Fantastic! Now I am considering having some sort of matching tattoo as Lucy. We already have small identical tattoos reflecting our wedding.

The tattoo parlour is run by a quirky husband and wife who got married on 31/10/13 dressed very gothic like and she looked (and does everyday) like Morticia Adams from the Adams family. Really lovely people who were aware of the real Lucy and made us feel so comfortable. As you can imagine during the 3 hours we were there we had lots of conversations and we showed them pictures of Lucy and myself out and about. It turns out that the wife's brother is also transgendered however they are just so accepting and made sure that the tattoo was feminine.

This place was a treasure trove of unique and unusual collections. The wife has many unusual dolls as well as an Annabelle doll sat on a chair. I couldn't resist sending a picture to our girls who have a bit of a doll phobia. They also had a huge Star Wars collection which was amazing (we are a family of Star Wars geeks - except Lucy!). 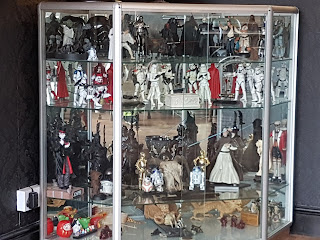 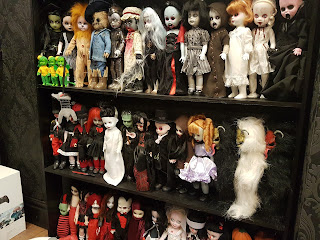 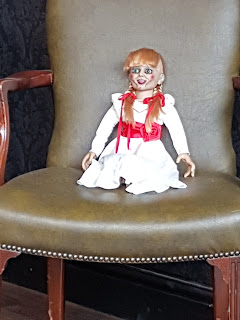 Lucy heals really well and by the next day all the redness was virtually gone. It has been slightly scabby the last few days but that is normal. If when she goes to the tattooist for the continuation and he feels it is not ready for phase 2 then he will start on the tattoo of the phoenix at the top of her other arm.

In trying to diffuse any questions about the tattoo in her male life, on her male Facebook Lucy posted that she was in the process of having a tattoo cover up done and phase one was done. Not many people knew she was doing this and the post got quite a few likes. However this prompted Lucy's eldest son to ring Lucy (he doesn't know about Lucy and we are concerned how accepting he will be) and asked lots of questions about the tattoo. He has several tattoos himself including one that says "like father, like son" and he does idolises his dad. He was upset as in his eyes male Lucy is defined by the tattoo that is being covered up. Lucy did find this slightly amusing as we know she is not that person and never was. She bit the bullet and told him she was having flowers as the cover up, said the colours and used the excuse that there were only certain designs that could be used as the old tattoo was quite heavy and dark (actually this is true but it would have had to have been something more male). I think he was surprised however accepted the explanation and then said later they should go and have a matching tattoo together..... he obviously doesn't realise that if and when this happens it will be something feminine.

In other news, no significant changes due to the hormones yet other than some side effects as expected. I am convinced there is some change in the boob area and Lucy thinks so too. Only slight but it is early days. It also does appear that hair regrowth is taking longer which could be a combination  of the meds and the IPL which Lucy is still using. On a side note I have been using the IPL on my upper lip and it definitely is working for me.

We also went out to Pink Punters on Friday with some good friends of ours. We got to the hotel early which meant we could all meet for dinner which was really lovely. Although we know of others trans girls that have eaten at the restaurant it is not known as a 'trans place' however everyone was very polite and friendly and only one lady couldn't help but stare. We got changed after dinner and the rest of the evening was great fun with lots of dancing as usual. The following morning we met some of our friends for a brunch before we parted ways off home. Another good night out. 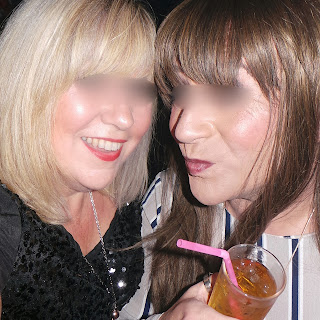 I have noticed in the past few days the hits per day on my blog have increased significantly. I have to say that it did make me smile knowing that out there in the Internet world there are people who are interested in my ramblings. Thank you!