The week before Christmas

It's the week before Christmas. Didn't think I was necessarily going to write a post but here we are.......

We are both looking forward to Christmas. It will be the last one where Lucy has to pretend to be him and the first one where I (well Santa) can put her presents under the tree on Christmas eve ready for Christmas morning as the only people in the house at that time are us and our daughters who both know about Lucy instead of having a private present giving hiding away as previous years.

Today Lucy's eldest son text me asking what to get his dad. Awkward! There is no point him buying anything male related as it would be totally wasted and a waste of his precious money. I had a think and found it difficult to come up with anything that could be considered unisex without giving too much away. I responded saying it was hard as if his dad wants anything he usually goes and buys it however his dad has lots of long baths (true) and is always stealing my bubble bath (not true as she has her own) and maybe he could get some nice bubble bath. I got a laughing ok response so hopefully that is sorted.

Today Lucy had an appointment at the GP for a blood test to check on her hormone levels now she has been on the patches a couple of months. She has changed her name on her doctors records and as it was a hospital phlebotomist who goes into the surgery to take the blood it would be someone that would not know Lucy's situation. Also at this surgery they come and call out the patients name. When she is full time this will not be a problem however at the moment she still isn't it could be a bit embarrassing so she asked if I would go with her. We turned up and there is one of those self check in screens where you put in the first letter of your surname and date of birth. We were shocked when her male name was returned. We sat down in the waiting area feeling a little confused as the GP said they had changed her name last time she was there. We were slightly amused by the advert that was on the TV screens there though. Didn't think it was quite appropriate for a GP surgery but did make us laugh! We did wonder what would happen if you didn't want to attend your cremation ;) 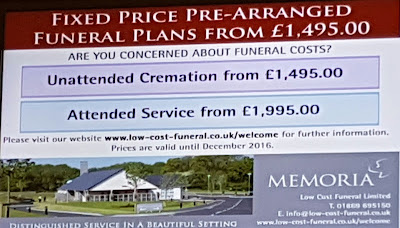 Anyway when it was Lucy's turn the nurse called her correct name. We both looked at each other as we were now feeling puzzled. We went in and Lucy sat down and explained that she was probably not what the nurse may have been expecting. On the blood form she definitely had Lucy's name and she said that she had been confused as the appointment was in the male name. Anyway she was very good and took Lucy's blood with no bother. On the way out the reception area was fairly quiet so we went and spoke to the receptionist quietly to explain that it seems they have not correctly changed Lucy's name on the records. The receptionist was great and checked it all out and said that she would get it sorted. Lucy is still going to email the GP anyway just to check it does get done. I've agreed with her that I will also go with her to the next blood taking appointment. To be fair I like going to all the appointments I can with her as although this is Lucy's journey we are taking it together.

We were chatting tonight and Lucy has expressed an interest in starting her own blog. This is something I never thought she would do but I do think it would be a great idea. She said that she would never have considered writing a blog if she was not in the situation she is and that I probably wouldn't have started writing one either for the same reason. I suppose she is right although a few people I know were trying to push me to write a blog about my daily commuting to London woes (long story but does involve losing flip flops on train lines and sneaky pictures). I told her I love writing this blog and for me it is a bit like talking to myself as I don't write it necessarily for other people (it is nice to know one or two people do actually read it) but for me and I do find it therapeutic writing about our life. If she does decide to do a blog I will link it here.

On behalf of Lucy and myself I want to wish you all a very Happy Christmas and a Fantastic New Year. 2017 for us will be a year of change. Yesterday's the past, tomorrow's the future, but today is a gift. That's why it's called the present!